Colonel Miller announced that in 2016, Buckley’s fiscal impact on the local economy was more than $905 million with over 4,000 jobs created.  “We are members of this community,” said Miller. “My Airmen live next door to you, their families live next door to you, so it’s important to us that we establish a good readiness posture and that we are welcome to our neighbors. 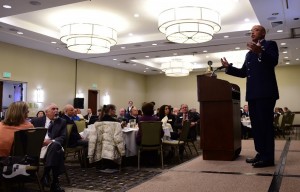 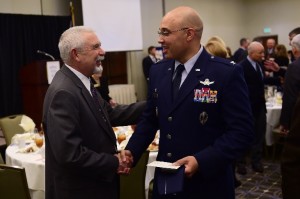 Aurora City Manager Skip Noe and Colonel David Miller shake hands after the State of the Base Luncheon. During the luncheon, Colonel Miller reviewed the base’s accomplishments for 2016 and a preview of initiatives for 2017.