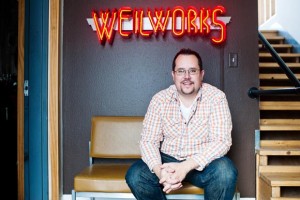 The seeds have been planted and the Aurora Cultural Arts District is starting to grow and blossom. The soil is rich with theatre, culinary arts, visual arts, and cultural diversity. It’s a great recipe for creativity and imagination.

Designated in 2012 as a prospective Creative District, the ACAD’s mission is to encourage artistic and cultural creativity through advocacy, promoting programs and activities, supporting multicultural urban communities, and providing opportunities for diverse expression.

Headquartered at 1400 Dallas, the ACAD building is also home to 14 creative studios.

So, as the managing director of the ACAD, Tracy Weil is very busy.

In his May 2 presentation to Business for the Arts, Weil shared many of the exciting things ‘breaking through the surface’ in the District, including:

The District also has a pop-up space in the Stanley Marketplace, highlighting artists with connections to Aurora, as well as some Stapleton artists. In fact, the ACAD is helping to procure some of the murals in the Marketplace.