Mark Seglem, Regional Vice President, discussed the degrees and programs available at CTU.  He also talked about CTU’s student success coach program and the how they support our men and women in uniform. At the end of this year, CTU will have awarded 500 wounded warrior scholarships totaling more than $8 million.  We also welcomed three new commanders.

Finally, a huge thanks goes to the Radisson Hotel Denver, Southeast for providing the delicious breakfast. 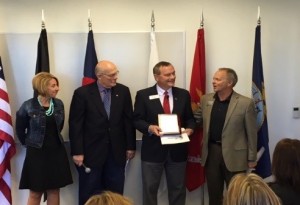